“I don’t know what that means,” the governor said Tuesday at an event in Emeryville. “I don’t know that he knows what it means.”

Newsom was in the East Bay to tour a low-income housing project that was built with a mix of state, local and federal money and programs. The governor used the 87-unit development as an example of what can be done when all parts of the state work together.

“People should expect more from the state, but everyone has to row in the same direction,” Newsom said as he stood on a rooftop area overlooking busy San Pablo Avenue. “The state of California can’t solve this. Cities and counties working together with the state and the federal government can.”

But the federal government — and Trump especially — hasn’t been pulling its weight, Newsom said.

“If interceding means cutting budgets to support services to get people off the street, (Trump has) been very successful in advancing those provisions,” the governor said. Instead, he argued, the president has been “decreasing the social safety net to address the reasons people are on streets and sidewalks in the first place.” In an interview aired Monday night on Fox News, the president called out San Francisco and Los Angeles for their homeless problems.

“Areas that you used to think as being, you know, really something very special, you take a look at what’s going on with San Francisco, it’s terrible,” Trump said. “So we’re looking at it very seriously. We may intercede. We may do something to get that whole thing cleaned up. It’s inappropriate.”

Newsom admitted that California cities have problems with homelessness, but said the state is on the front lines when it comes to dealing with what has become a national concern.

“Tell me two cities in the country that are doing more than San Francisco and the city and county of Los Angeles,” Newsom said.

But if Trump wants to help, the governor said he’s eager to see what shape that assistance takes.

“Federal support is critical” when it comes to adding housing and cutting back on homelessness, Newsom said. 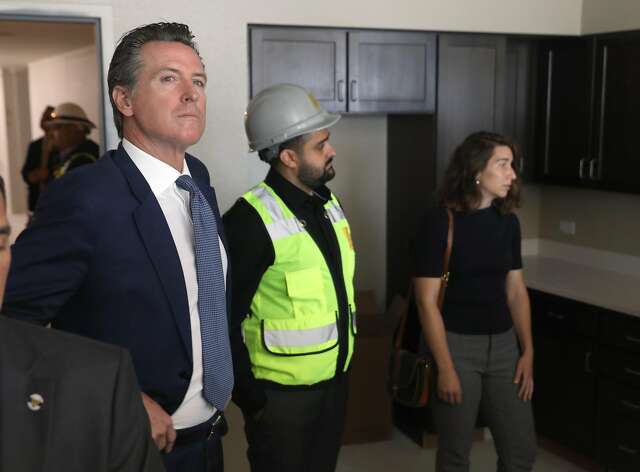 The new Estrella Vista Apartments, expected to open later this year on San Pablo Avenue on the Oakland-Emeryville border, are both an example of what can be done and a warning about how hard it is to provide low-income housing in a densely built urban area.

Emeryville provided money and the land, Alameda County used tax credits, the state used cap-and-trade money intended to combat climate change, and Oakland provided money and federal vouchers for subsidized rent. Every part of that complex funding formula was needed to make the six-story building pencil out, said Welton Jordan, vice president of real estate development for EAH Housing, a nonprofit builder that has 110 developments in California and Hawaii.